Indiana's largest watersnake is quite distinctive; sporting dark bars and dashes that form a chain-link diamond pattern down its back. Most individuals are relatively light-colored gray to olive-green with red eyes that site more squarely on top of the head than most Indiana snakes. Though most adults are three to four feet (90 cm - 1.2 m) long, some individuals may approach five and a half feet (1.6 m) in length. 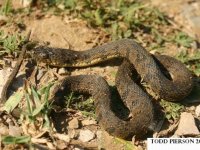 Northern Watersnakes are common in the same bodies of water as this species, but have large, dark brown blotches instead of narrow bars and bands, as in this species.

This species is highly aquatic and can be found in lakes, ponds, swamps, marshes, ditches, and streams. Its diet consists mostly of slow-moving fish and amphibians. When threatened, specimens exhibit defensive behavior and will not hesitate to bite. During warmer weather, this species becomes strongly nocturnal, although they can commonly be seen basking on logs or branches near water. When alarmed, they drop noisily into the water from their basking site and are capable of remaining underwater for more than an hour. 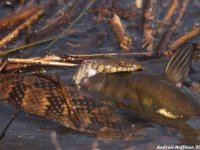 It is considered common at some sites within this range, but is listed as state Threatened in Iowa. This watersnake is locally abundant in Indiana.

Diamond-Backed Watersnakes are found only in the southwestern lowlands along the lower Wabash and Ohio Rivers. They are common along sluggish streams and in oxbow lakes and other permanent aquatic habitats, but also frequent adjacent wetlands. 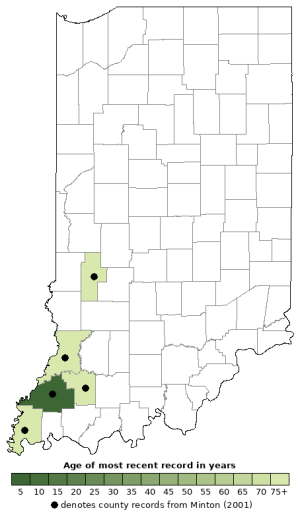