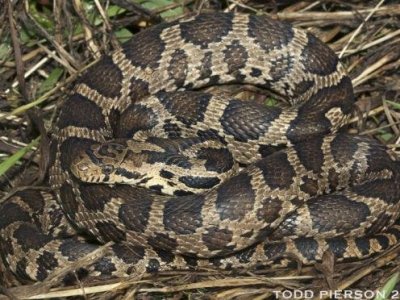 This relatively long, brown to tan or yellow snake is similar to many other blotched or banded Indiana snakes, but found only in the northwestern part of the state. Though most of the snake is a dull brown or tan color, the head is sometimes a rusty red-brown. This snake is closely related to Gray Ratsnakes and shares their slightly keeled scales and checkerboard of dark squares on the underbelly. However, this is a slightly smaller species that often grows to around four feet (1.2 m) long and, only occasionally, exceeds five feet (1.5m) in length.

The Eastern Foxsnake is a prairie grassland and farmland snake that prefers moist habitats to drier ones. It thrives in areas like fields and railroad right-of-ways. The distribution of the western fox snake in Indiana is limited to the northwest corner of the state. The Eastern Foxsnake preys mostly on small rodents that it kills by constriction. It may also prey on birds and their eggs. When threatened, it vibrates its tail. If the snake is in leaves, this vibration may create a sound similar to a rattle that often causes people to confuse it with a venomous rattlesnake. If cornered, this snake will coil, raise its head, and possibly strike.

Eastern Foxsnakes are only found in the northwestern part of the state but inhabit a wide range of habitats including forests, old fields, and prairie. They frequent wet areas such as the margins of wetlands and streams and may even be found along the grassy margins of irrigation ditches in agricultural landscapes.

The taxonomic history of ratsnakes (the group to which the Eastern Foxsnake belongs) is contentious and complicated. For many years, North American ratsnakes were placed in the genus Elaphe, but Utiger et al. (2002) demonstrated this genus to be paraphyletic and recognized the genus Pantherophis to remedy the situation. Burbrink (2007) recommended the use of the genus Pituophis, and Collins and Taggart (2008) proposed the use of the genus Mintonius for these snakes, but few herpetologists support these recommendations.

These snakes are members of the family Colubridae, which is represented by a total of 28 species in Indiana. 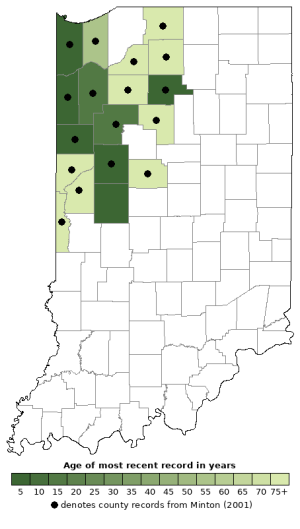 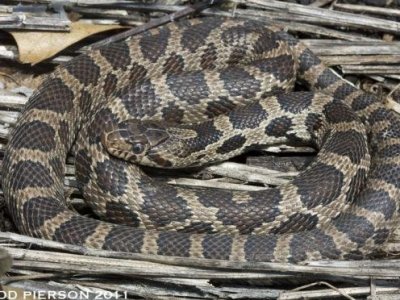 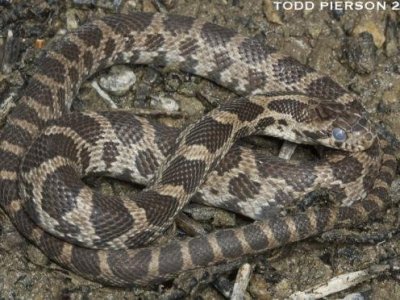