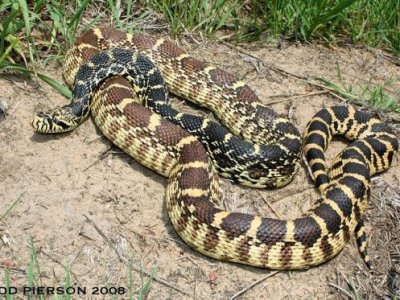 Bullsnakes are large, unique snakes of Indiana's remnant sand prairies. They are one of only two snakes to hiss loudly when threatened or handled (Eastern Hog-Nosed Snakes being the other) and are often a vibrant yellow color with bold, dark patterning that becomes darker and more profuse toward the head. They have a broad, dark stripe connecting and extending past the eyes on the side of their head. Adults can grow to over six feet (1.8 m) long and some, very large individuals have been captured at around eight feet (2.5 m) long! 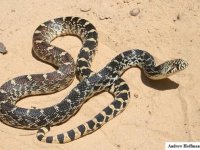 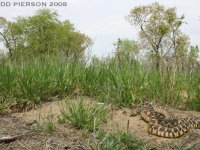 Eastern Hog-Nosed Snakes can be similarly colored and will also hiss loudly when handled, but their scales are more heavily keeled and they have a distinctive upturned and pointed snout. Eastern Foxsnakes and Eastern Milksnakes occur alongside Bullsnakes, but are generally darker brown in color, smaller, and do not exhibit marked changes in dorsal pattern along the length of the body, as do Bullsnakes.

Despite the fact that the Bullsnake is a prairie-dwelling species that lives in a relatively small area in northwest Indiana, it is not endangered because it has adapted well to old fields and abandoned lots as suitable habitats. They are excellent burrowers and are often discovered when digging. Their survival in agricultural areas is largely due to this fossorial habit. Their main diet consists of mice, squirrels, rabbits and birds. When disturbed or threatened they hiss loudly, vibrate their tail, and may strike.

The Bullsnake is a state species of Special Concern in Wisconsin. 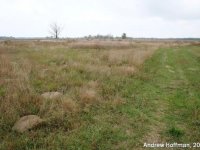 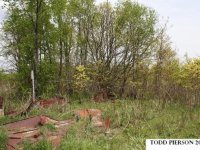 The distribution of the Bullsnake extends from southern Alberta to southwest Wisconsin, and south to southern Texas. Bullsnakes are restricted to the northwestern sand prairie region of Indiana, but were historically known from remnant sand prairies in Knox County (that are now largely gone). Isolated populations persist in northwest Indiana across to Illinois, and in southwest Indiana.

They are burrowers that inhabit sandy-soiled, open-canopy environs and feed heavily on rodents. Though they are most abundant in sand prairies, they persist in agricultural areas and around human dwellings where cover (boards, sheet metal, etc.) and prey are abundant.

The species Pituophis catenifer is known as the Gophersnake, and those snakes found in Indiana are in the subspecies known as the Bullsnake (P. c. sayi). These snakes are members of the family Colubridae, which is represented by a total of 28 species in Indiana. 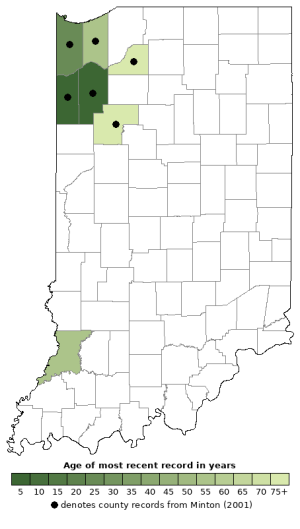 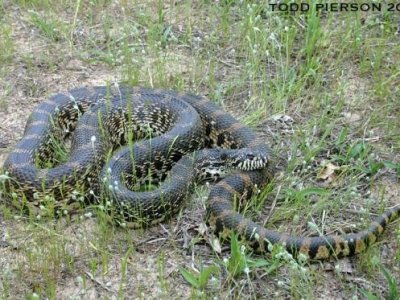 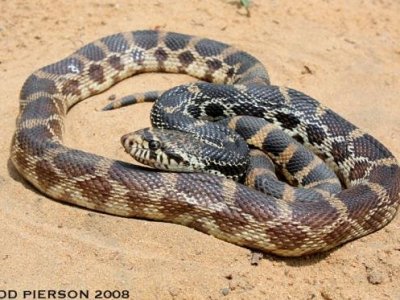 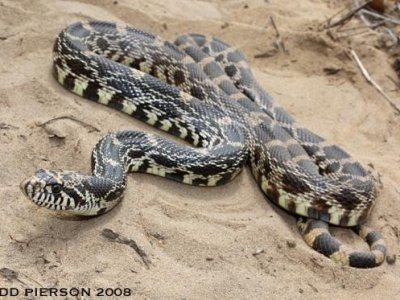 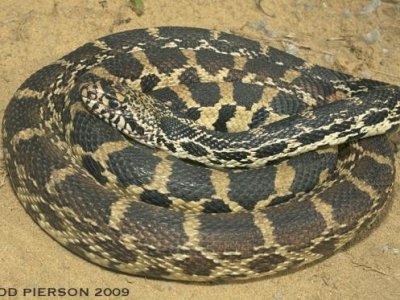 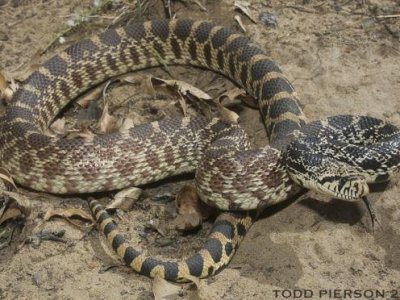