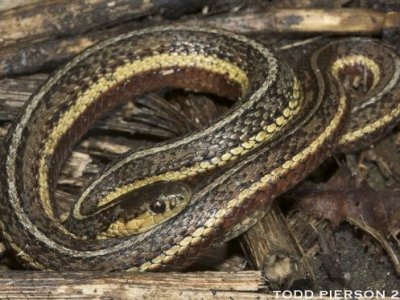 Butler's Gartersnakes are small, striped snakes that are easily confused with their much more common and widespread relative: the Common Gartersnake. Most Butler's Gartersnakes are dark brown in color with white to yellow dorsal and lateral stripes. This diminutive snake rarely exceeds two feet (60 cm) in length and reaches maturity at just over a foot (35 cm) in length. Their head is notably smaller than other Thamnophis and the neck is indistinct.

Eastern Gartersnakes are easily confused with this species and are much more likely to be encountered in Indiana. There is a notable size difference between the two species and any snake over two feet (65 cm) long is almost certainly an Common Gartersnake. Though Common Gartersnake are larger and have a more distinct head and neck, the most reliable way to differentiate the two species is by determining which scale row the lateral stripes overlay. In T. sirtalis, the lateral stripes fall on the second and third row of scales (counting up from the underbelly) whereas the stripes overlap the third and fourth scale rows in T. butleri. Eastern Ribbonsnakes are similar in coloration and pattern, but are a long and slender snake by comparison, with a much longer tail.

Butler's Gartersnakes are apparently rare in Indiana, known from only a few scattered localities in northeastern quadrant of the state. The distribution of the Butler’s Gartersnake is highly fragmented within its range. Its distribution extends from central Ohio, west to central Indiana, north through eastern Michigan and into the adjacent southern portion of Ontario, Canada. Disjunct populations can also be found in southeastern Wisconsin and in the central peninsula of southern Ontario.

Within the Midwestern states the Butler’s Gartersnake is found within the northeast quarter of Indiana, in the eastern and southern Lower Peninsula of Michigan, across the northern two-thirds of Ohio and from southeastern Wisconsin. The species is absent from Illinois, Iowa, Minnesota and Missouri.

No subspecies of the Butler's Gartersnake (Thamnophis butleri) are currently recognized. These snakes are members of the family Colubridae, which is represented by a total of 28 species in Indiana.

Carpenter, C.C. 1953. A study of hibernacula and hibernating associations of snakes and amphibians in Michigan. Ecology, 34:74-80

Minton, S.A. 2001. Amphibians and Reptiles of Indiana. Indiana Academy of Science, IN. 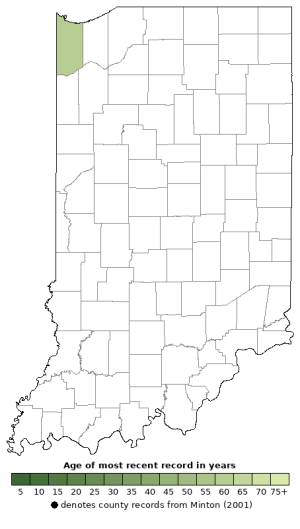